It has been awhile since these fingers have been typing away writing words of my life. From the looks of it, about 3 years have passed since anything new has appeared. Let me tell you, a lot can happen in 3 years. In certain aspects, it doesn’t really seem like that long at all, but a lot has happened. Ups and downs. Happy and sad. I am here to bring up to speed on those words of my life. Shall we begin….?

To start right off the bat, the year 2013, I got pregnant. Was it planned? No. It was the best thing that happened to me and something that launched me to where I am today. Surprisingly, shortly after my last post, that belly of my started to grow, and not from eating too much ice cream. It was such a crazy thing that I just knew I was pregnant. So many mom’s always say “you just know” and now I knew exactly what they were talking about. Also, did you know how exhausted you get?! That bed of mine could have held me hostage with how drained I felt. Growing a baby is hard work! Luckily like most moms also said, “oh that’ll pass after the first trimester, and then you will be full of energy.” Working those 4:30am shifts at the bux didn’t help the outta gas feeling this mama had. Oddly enough, my nausea lasted a week, my exhaustion lasted a week, and all I wanted to eat was potatoes, but mostly those delicious greasy french fries. Through the summer, and french fries, I had to anxiously await to find out if I was going to have a sweet baby boy or girl. September rolled around and….. 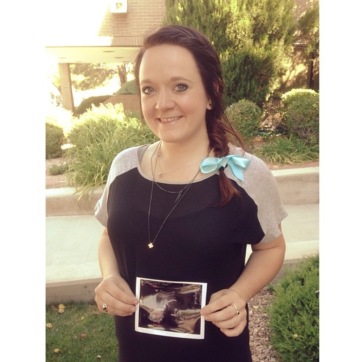 It’s a BOY! My dad was thrilled! After having three daughters, and one granddaughter, he was ready for a grandson! A few months later, we also found out that my oldest sister Robbin, was also going to have a boy. It was going to be learning curve for all of us having these baby boys. I was over the moon, and excited to meet this little one. It was time to think of names as well since I had a plethora of girl names picked out. A couple of months later after my lease was up, I had the pleasure of living with my Grandma Maxine for a few months.If anyone knows my grandma, you know how wonderful this is. We spent many mornings talking, laughing, playing games. It was a happy time for me and I learned a lot from her in that short amount of time. We also thought up different names for this baby boy, one that was on the top our both our lists was Quincy. Yes, just like all of you were thinking, quickly that name was out of the running. In those months, it was over night that my belly popped. Here is me at about 29 weeks:

I was fortunate that I had a pretty easy pregnancy. Wasn’t too sick and kept trucking along. It was when I came home with cankles after my work shifts I realized I think I need to cut back to 4 hour shifts. I was working away and continuing going to school. I had an amazing baby shower a couple of months before my due date and oh how I felt so loved. I was filled with amazing woman who loved me and my son and showed my an immense amount of support. I was blessed with wonderful gifts for this sweet boy and day by day it was becoming more real. 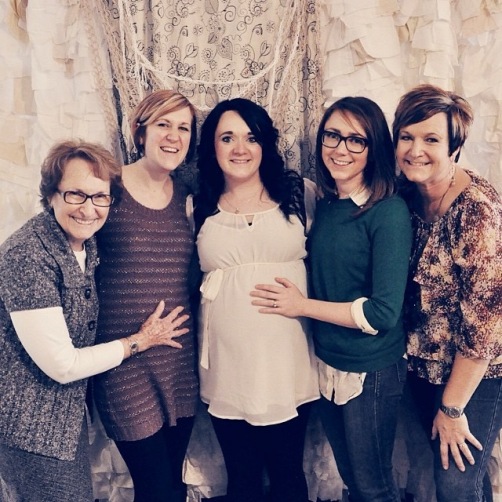 My loving grandma, sisters, and mother

A few weeks before Christmas I moved back in with my parents. They had redone the whole basement for me, so my sweet boy and I could have a space of my own. It was last few weeks before my due date of January 19, 2014. I was looking forward to Christmas as it being my favorite holiday. That year, like many other years, we had Christmas Eve dinner as a family. Who would have guessed that’s when I would decide on a name! Well…I can’t take all the credit. My sister Bethany, was the one who mentioned the name and hearing it (although I had heard it before) I knew immediately, yes that’s his name! 🙂

This year was one with change, many emotions, tears, and laughter. The thing I learned the most through this whole year is to be confident in you. No one is perfect. In my different circumstances, I was surrounded with love and support especially from my family. With this pregnancy as a shock, no one loves my son or me more than them. They are encourages and my loudest cheerleaders. There is no way I would have gotten through any of that without them. You know, people are going to be who they are going to be. I learned quickly that yes in some eyes I may have made a mistake, but I don’t think there are ever unwanted children and no one was going to love this son of mine more than I was. During this time, I grew closer to God and leaned on him more and more. I knew that he still had an amazing plan for my life. It was a year of growth, but I knew there was more to come and areas for me to grow for myself, but also as the mother I was about to become. In no time at all, that baby boy of mine was going to be in my arms…